Using only a few options for tangles and the same string, the multifarious (just learned that word and had to use it!) results for this week's challenge are a real treat to behold.

Ragged Ray said she was drawn to the shape of the string line. 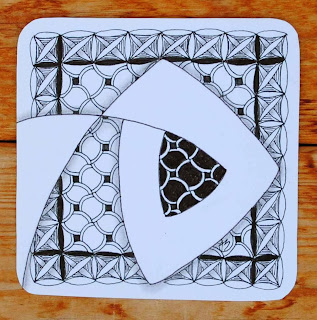 She said that she tried a few variations and really liked leaving the inner string lines white.  It is a striking look, especially with the added shading.  Using Fife as a border along with the of dark lines and spaces are thoughtful touches.

Brenda Urbanik created a beautiful tangleation of Fiore in her tile this week: 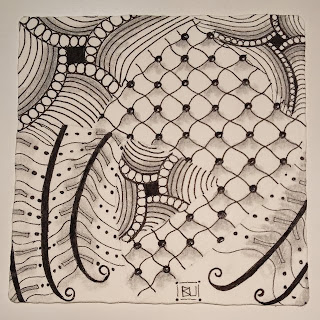 Her shading is wonderful too.  It's interesting that the string line disappears as her tangle patterns alternate.

Audrie Weisenfelder sent in two tiles this week.  In the first one she used all four of the "Fi-" named tangles: 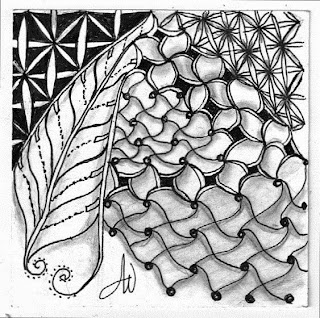 Her use of Finery and it's wispy curls create a pleasing contrast to the weighted Fife.  She created a nice touch with the intermingling of Fish Net and Fiore.  Here is Audrie's second tile:
﻿
﻿ 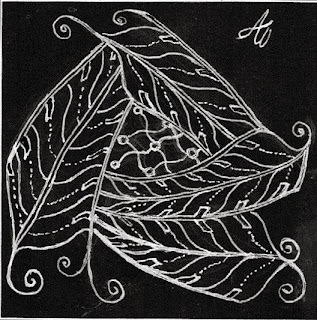 What a pretty use of Finery with this string line - and the contrast with white on black is a nice touch.

Deanna Spence submitted this tile - complete with a sparkly background. 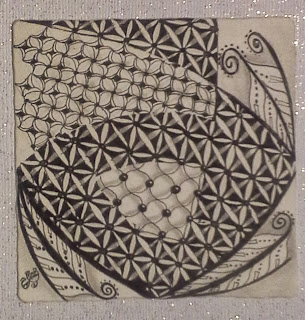 It's a treat to see what Deanna does with her tangles as they come to the edges of her tiles.  Note how she tapered off Fiore, creating an interesting edge (left side) as well as along the upper edge where Fiore seems to pull away from Fife.  Her shading of Fife makes it pop! 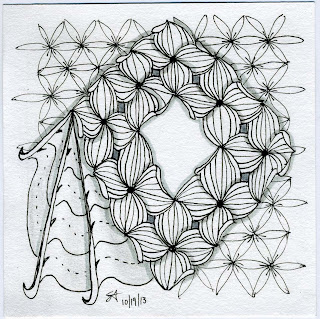 Sue has such a beautiful touch with her fine lines.  The aura added to Fiore creates a sweet variation and her shading gives it wonderful dimension.

Joan Delony said that this really challenged her.  She worked on five tiles before completing one that she would send in.  Thank you for your persistence!

The way Joan's Fish Net drapes over Fidget is very pretty.  Her Fish Net bends and moves through the middle of her tile adding a nice touch.  Her Finery scrolls are very graceful.

This next tile is from newcomer Jenna Wheatman from the UK.  Jenna found Zentangle on the internet and is self taught.  (You have our collective admiration, Jenna!)  She said that she noticed how shading is important in a finished tile and is adding it to her work now.  - 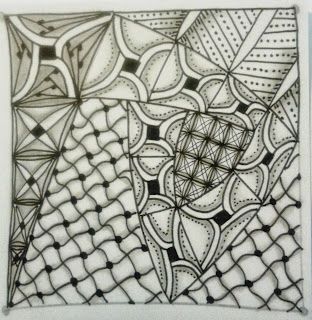 The tile for honors this week was created by Mindy.  Isn't it lovely? 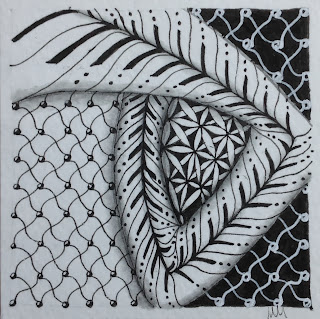 Mindy used Fish Net and then again in reverse to create such a pleasing compliment.  Fife in the center section, with its curved lines and shading, appears bulbous.  Finery can be a challenging tangle, especially to maneuver around turns, but Mindy managed that with ease here.  The weighted lines turning into the center of Finery add wonderful movement.  Such a pretty piece, thank you Mindy.  I have a little something coming in the mail to you (again!).

One of the wonderful things about this challenge, as Sue Agnew wrote in a note, is that "she always learns from what others do."

Many thanks to all of you for sending in your treasures.

Through your work, we learn, are inspired, and build confidence in our own style.  Thank you!

Many thanks as well to the creative minds behind the tangles and string used this week:

Note:
Please feel free to leave a comment in the box below.
If you would like to hear from me, please use the email box located to the right.