Last week's challenge used tangle patterns that began with the letter 'Y' in honor of the string's creator, Yamit Fridman.  Here are the submissions for you to enjoy.  Look over them, study the way other tanglers use patterns, shading, and enhancements.  Use their work as inspiration, and keep up your practice of Zetangle®.

And speaking of the 'practice of Zentangle' - Ragged Ray sent an eloquent note with her tile this week.  In part, she said, "This practice really feels like it has a natural progression of learning within it - tangles repeat and build and warp earlier ones."  Her tile is a wonderful example: 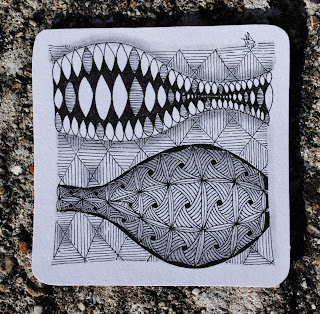 She added texture with her tangle choices, beautiful lines, and shading.  Her gravel backdrop is a nice added touch too! 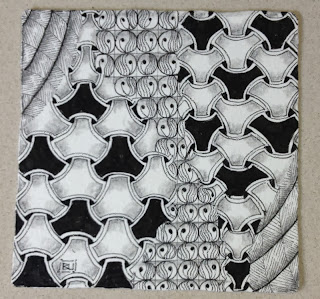 Brenda Urbanik's use of Y-Ful Tower and Yang make the middle of her tile flow so seamlessly from one pattern to the next.  Her choice to keep Yang light with aura and then use alternating dark and light Y-Ful Towers gives this great balance - such a pretty tile! 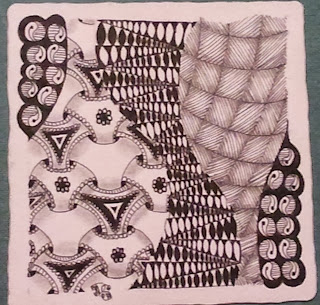 And speaking of pretty, Deanna Spence sent in this.  She enhanced Y-Ful Tower and added a whole new look to the pattern.  The dimension that it adds is just amazing.  Deanna, if you ever wanted to do a monotangle with this, I will post it.  I would love to see where you would go with it. (hint, hint!) 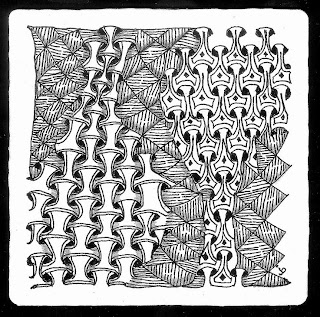 Jackie Becker used just two tangle patterns here and achieved such a nice look.  She added sparkle to Yincut and it shines.   I spy some shading too and it looks great! 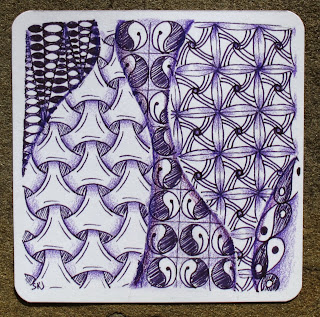 Sue Jacobs wrote that she was reminded of wine bottles with this string.  Add to that, her love of color, and she's given us a purple hued masterpiece! 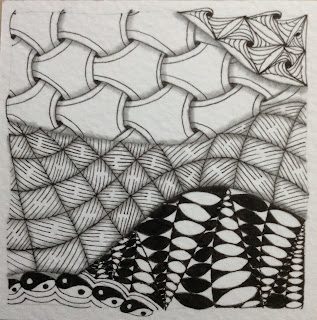 Mindy's tile is next.  She used just a bit of Yew-Dee and the swirl of it draws your eye in, doesn't it?  Her Y-Ful Flower is shaded just so - it looks like cut and tucked in layers of paper.  Just beautiful! 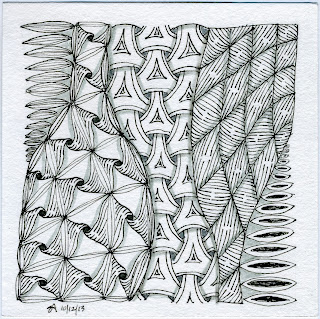 Sue Agnew's take on the pattern Yew-Dee here is fabulous.  It curves and wraps, has sparkle and shading - just so pretty!  Sue also sent in this from Arizona (not Illinois as I mistakenly wrote last week) - 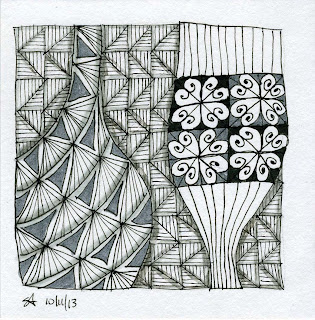 She said that it was not for the challenge, but she couldn't resist sending it in.  Why?  Because the string lines reminded her of wine bottles.  She tangled them in with Linda Farmer's patterns  Zin and Rosé.  Now, that is clever!

And the tiles selected for honors this week were sent in by Joan Delony.   Joan said that she drew out her tile twice because she "played with shading".  Her work is a wonderful example of the effect that shading has on tangles and how it can be used in varying degrees to change the look and feel of a piece. 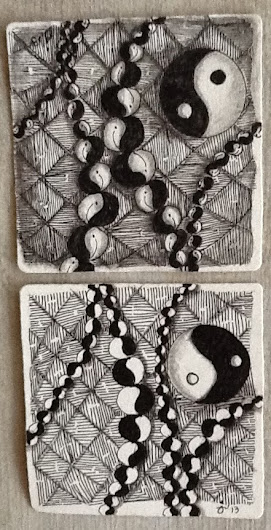 Thank you for sharing your experiment and beautiful results with the rest of us, Joan.

I have a little something coming in the mail for you!

Many thanks to the creative minds behind our string and tangles this week:
Yang by Genevieve Crabe, CZT
Yincut an official Zentangle pattern
Y-Ful Power by Shoshi
Yew-Dee by Peg Farmer, CZT
Yoga by Margaret Bremmer, CZT
and Yamit Fridman via Linda Farmer for String 009

Check back tomorrow for "It's a String Thing" #10 - we are in double digits already!
Posted by Adele Bruno at 11:17 AM

Email ThisBlogThis!Share to TwitterShare to FacebookShare to Pinterest
Labels: "It's a String Thing" Results, Patterns, Strings