A few weeks ago, my  Wednesday's Words of Wisdom featured a tile that I completed featuring circular shapes filled with lines.  The idea for the pattern came from something I saw on the front of a greeting card.

I've tangled it many times since, and it has happily grown into a pattern.  I'll explain more below, but first, here are the step outs ~ 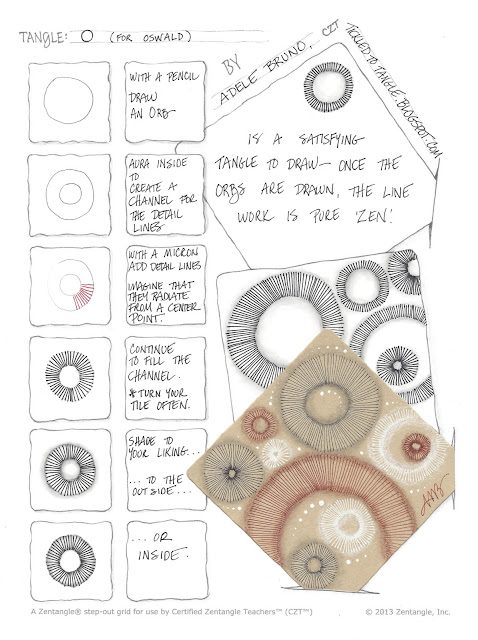 In a recent class, when I mentioned that our daughter Catherine was newly engaged, one of my students asked if I had a pattern named for my future son-in-law.

Since I'd already been tossing the idea of these little O's around, it seemed only natural to develop it into a tangle and name it after Catherine's beloved, Oswald.

Here is a picture of the happy couple ~

A few notes about the step out:

*I consider this a tangle even though the first steps are done with a pencil.  If you think of the penciled orbs as string lines, then this fits the definition of a tangle :)

*The size of the circles and the thickness of each channel vary to add interest.

*Notice that the word "orb" is used.
It is a good idea not to get caught up in trying to draw circles.  Yes, you will pencil in rounded shapes, but even when you add the detail lines, they will change a bit.  As with all tangling, the end result is very much the sum of all of its parts.

*The initial pencil lines, true to string lines, blend into the shading and are not noticeable in the finished tile.

*There are examples of shading the outside and inside of each circle.  You can also shade both as I did in the Renaissance example above.

This same idea that I've used with circles can be applied to most any basic shape and work well - triangles, ovals, rectangles, hearts, etc.

Some additional variations to consider:  add sparkle, curve the lines, make the inside circles a bit off center.

I do hope you enjoy exploring the possibilities O provides.