The Awesome Art of Aura

In the Zentangle® Method, aura is one of the most fascinating tangle enhancers.  It transforms a pattern and morphs the space around it into something unexpectedly beautiful.

In Rick Robert's and Maria Thomas' latest book, The Zentangle® Primer Vol. 1, they describe aura as: "A line drawn equidistant next to another line or tangle, that follows the shape of the existing line or tangle - like a halo or a ripple in a pond." (p.143)

Aura usually follows in an equidistant manner to existing lines, but as with all things in the Zentangle Method, there is encouragement for creativity and exploration.

Most of us were introduced to the concept of aura in association with Crescent Moon.  In my example below, Crescent Moon is aura-ed as the definition above describes: 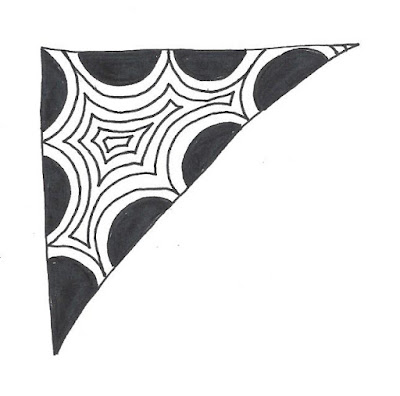 Notice that each aura is drawn at about the same distance from an existing line.

Side notes:  When using aura, as with all tangles, keep in mind that the whole is very much the sum of its parts.  Focus on the outcome, not on one particular line that may not have - at first - gone in the manner you intended.
When I teach this concept, I always interject that I am a "reformed perfectionist."  In the past, a line that may have strayed a bit, become wobbly, or fallen short of the intended mark, would have unsettled me, perhaps even driven me to begin again (gasp).  That there are "no mistakes", only creative opportunities, that there is no backspace button when tangling, and that the idea (a great metaphor for life) is to always move forward, has released me of those tendencies to strive for perfection.
Only God is perfect, so the pressure is off the rest of us!


Now, taking the same Crescent Moon example, I'll add aura again, but this time use one continuous line as I work toward the center: 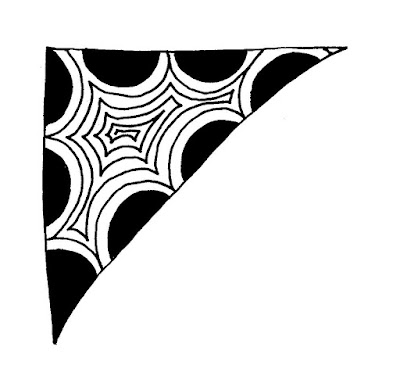 The look is similar, yet has its own nuances .

Let's explore one more option using Crescent Moon.  After the initial aura, I'll add subsequent aura and each time return to the points of the first aura line: 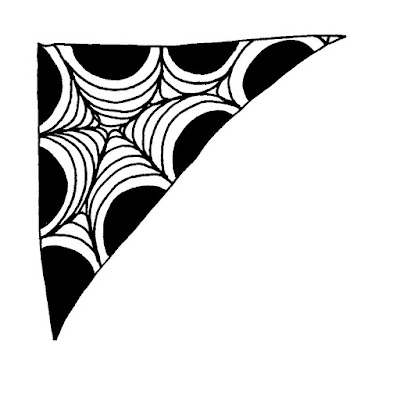 Again, similar strokes, yet the look is much different from the first.

Here they are side-by-side for easier comparison: 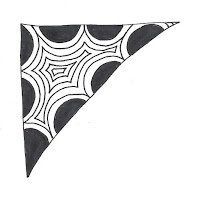 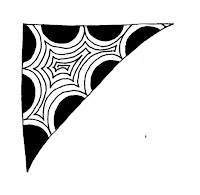 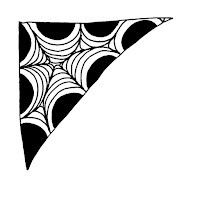 This leads me to one more type of aura that has fascinated me from the time I learned of it through Yamit Fridman's Z-Trick pattern.  In her step out, Yamit adds inner aura to Z-Trick's triangles by beginning and ending at the same point.

I often refer to this technique as "Z-Trick" aura.
Let's do a little experiment by adding aura to triangles in three different ways:
*equidistant and individual aura
* equidistant and single line aura, and
*in Z-Trick fashion ~

Ahh, the endless possibilities of tangling...


The continuous move of the pen that Yamit used in Z-Trick inspired two of my patterns: Pauline's Pigtail and Uncorked.  Both of these tangles begin and end at the same point and include that pleasing, continuous movement.

Here is a monotangle that features Pauline's Pigtail ~

And here is a Zendala that features Uncorked in the center ~

I hope this inspires you to explore even more aura in your tangling.