This is the fourth post in the continuing story of my "Paper Pilgrimage" to Fabriano, Italy.  Here are the links to the first three if you are just joining in:  Part I, Part II, Part III.

It took months of planning to coordinate our trip to Italy to include a visit to the city of Fabriano. Lou, a meticulous planner, asked me many questions about what my expectations were for our time there.  It was such a leap of faith to set out for Fabriano, I had to be certain that it was what I wanted to do.
In order for it to fit into our broader plans for Italy, we had to rent a car, drive across the country, and hope to be able to somehow find out where and how I could purchase paper and sign a guest book - my two hopes, my two dreams for a visit there.

"What if we can't get a tour, or go near the factory?" Lou asked, checking one more time before he made all of the reservations over the internet worlds away from our home in Florida.

"If I just get to stand outside the door of the factory and have my picture taken there, I would be satisfied," I blurted out.  I didn't have to think before I spoke.
The answer surprised even me.
It was that important.

Now to resume the story... 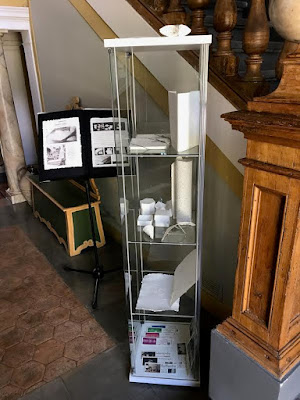 A little side note I meant to include in the last post...just before we left the hotel and just before our exchange with Mario, I placed my tangled Zendala box atop the display and took a photograph.  To me, it tied together the gifts that the Zentangle Method has given me and my appreciation of Fabriano paper - a little secret union (up until now that is :)

Leaving for the city, we pulled over to the side of the road to take one last look at the "Villa of a Thousand Windows". 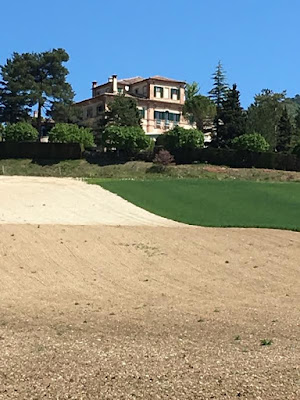 Looking back, our stay at the Marchese del Grillo would have satisfied my every notion of Fabriano: the paper display in the lobby accompanied with the luxurious little history book, all of the exquisite details of the villa, the warm hospitality...but little did we know what awaited us in the city.


The museum was located in the city proper across from a lovely park.  We circled the cobblestone block a few times looking for a place to park.  Fortunately we found a metered spot just a block away.  The directions for payment were in Italian and we fumbled a bit to understand what to do.

In the parking lot was an affable, very tall and very dark skinned gentleman peddling his wares.  He spoke English in a deep, melodic voice.  Humored by our puzzlement, he was very helpful.   He showed us the coin machine and where to display the proof of payment on the car.  In our brief exchange, we joked about many things:  being new to Italy, travel, and even American politics.  We tipped him to show our gratitude and parted with a mutual exchange of "God bless you."  I was struck by the universality of kindness and laughter.

We only saw him for just that brief bit of time.  It could be because he was not legally allowed to pedal his wares on the streets of Fabriano.  Across Italy we saw many immigrants selling any number of things, constantly on the lookout for the police, and swiftly scattering off at any sight of them.

It also could be that he was there at just the right time, at just the right place, when we needed a bit of help in a strange, new place.  That gentleman (an angel to us) made such an impression that I can still hear his full bodied laugh and when I do, I say a little prayer of thanks.

As we walked toward the museum, the park was to our right and this ancient wall was to our left. 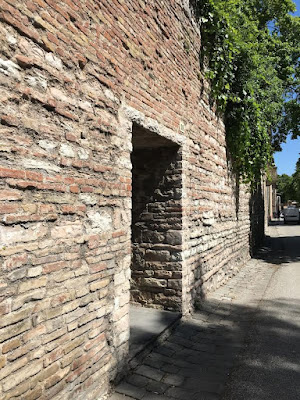 We followed the signs and just a short distance up this alley... 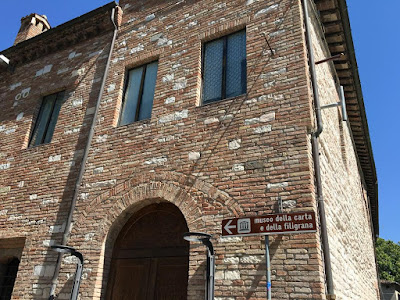 ...we came to the entrance to the Paper and Watermark Museum.

Through the open door on the right, we entered a wonderland of paper making history.  There was a display room to our left and a small office and gift shop to our right.  We walked into the gift shop.

Jutting out into the space was an elongated, curved counter top.  On one end was a cash register and on the other, a beautiful opened book. On it, some handwritten notes and signatures.  "This is it!" I remember thinking and with that thought, a dream like feeling came over the entire experience.

I could hardly feel my feet on the floor.  A bit shaky, I pulled out a pen from my purse that I brought from home.  The pen was a gift from my good friend, Kelley. In many ways, circumstances that united our families and formed our friendship led, in part, to my involvement with all things Zentangle.  I wore my scarf from Zentangle (link). a necklace made by Su D'Alessio (link), and best of all, Lou and I were together. 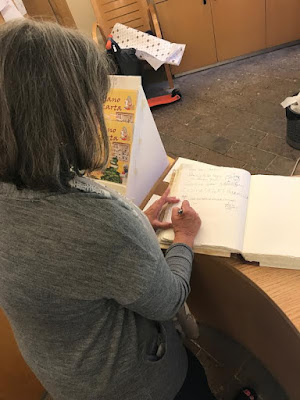 It bears repeating that while I signed that book, I felt the presence of everyone with me - my dear readers, students, friends, and family, from whom I learn so much. 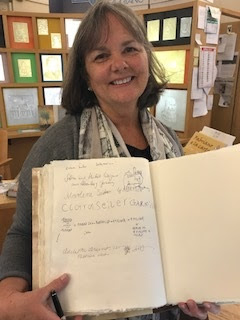 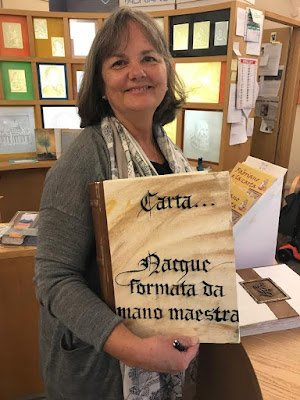 After some reveling in that glorious moment, we took a look around.  Everything was beautifully appointed.  A touch of modern craftsmanship in a clearly ancient space.  Light colored wooden cabinets, display cases, and drawers.  Back lit sheets of beautiful paper displayed the most detailed of watermarks, shelves held little handmade notebooks.

The relatively small room was divided into both retail and office areas. 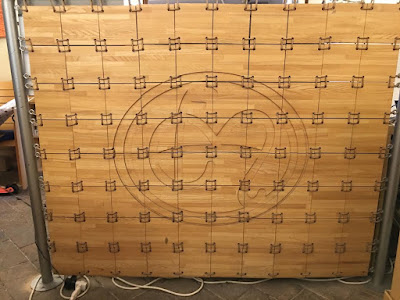 This room divider was a work of art in itself ~ a large square (approximately 4' x 4') created by individual wooden squares, tied at each corner to create rope squares with the watermark of the museum carved into it.  It screamed Zentangle!

Lou and I realized that we were alone save for an older gentleman who popped out from behind an office door.  He greeted us in Italian.  After a few attempts at communicating, he appeared equally frustrated that he didn't speak English as he was that we didn't speak Italian.  He motioned for us to follow him.

We walked through an arched doorway, into the courtyard.  He opened a glass door and flipped on the lights to reveal a very large room filled with rows of blue velvet covered theater seats, about one hundred of them.

In the front of the room was a long wooden table and atop that was a huge flat screened television. Not at all unremarkable, except that above it was an obviously centuries old fresco of the crucifixion of Christ. 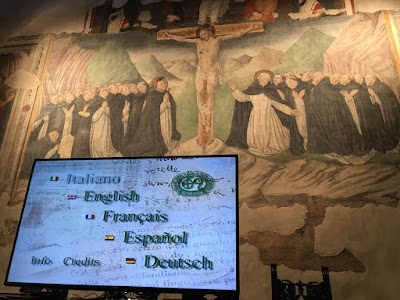 He inserted a DVD into the player on the table and selected "English".  With that he scurried to the back of the room, turned out the lights, and shut the door.

Did that really just happen?
Could we really be here?

The movie began.
I wish I had the script to convey here, but in a nut shell the narrator began with an explanation that paper has held its own over the course of history, even in this age of computers and electronic filing.  It touted the impact of a handwritten note on beautiful paper and the need for it in producing fine works of art.
The narrator gave a brief history of the creation of paper, how the industry came to Italy, how it progressed through the ages, and how its history - dating back in Fabriano to the early 1200's - is lovingly preserved here.

The movie ended and we sat there in the dark and in the silence.  "What do we do now?" we both wondered aloud...

Lou got up, flipped on the lights, and took this picture.  It was our way of pinching ourselves to make sure we were not dreaming.  I'm seated in the front row there, just on the lower right of the photo... 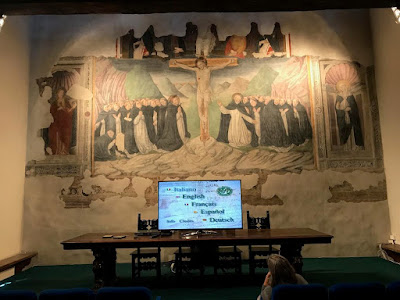 After Lou turned off the DVD player and television, we walked up the main aisle of the theater room, turned off the lights, shut the door behind us, and strolled back out into the courtyard.

We were the only people in sight.  The glorious open courtyard before us, we wandered into room after room off of the surrounding hallway. 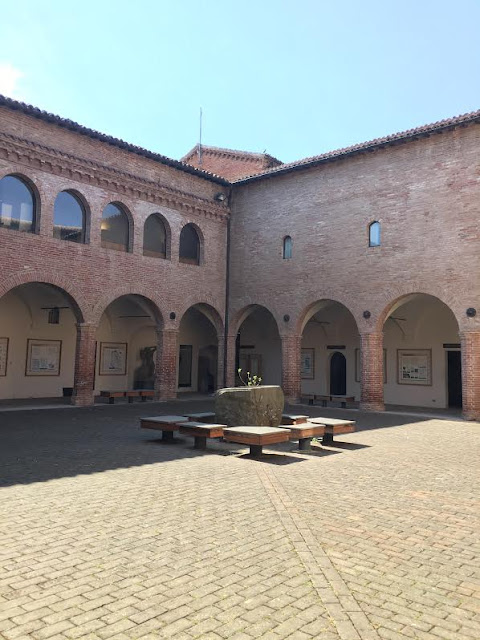 Each room held a different treasure.  Because of what we learned in the movie, we could identify some of the things we saw.  This table held stacks of the thick felt pieces used to extract water from newly formed paper. 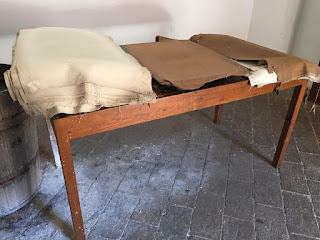 We could see that the museum not only housed these centuries old pieces, they were used in demonstrations and classes held there.  These felt rags were damp to the touch.

This station had a slightly more modern set up in front of one dating back to the 1700's.  The water-filled bucket on the left in the foreground held an electric device that churned and chopped the cotton fibers. 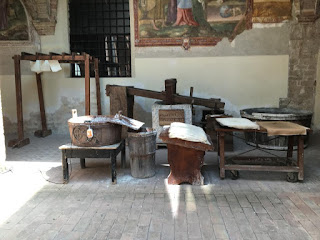 I carefully moved the control to the side to take this photo of this carved watermark that decorated the bucket. 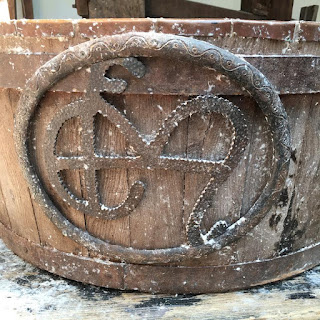 What looks like snow in the photo are actually dried cotton fibers.

As we spent time piecing together what we learned from the movie and what was before us, we were startled to hear someone calling to us from behind, speaking in English.