We Are On The Tangled Map!

We are literally on the map - my new "It's a String Thing Map".

Some time early last year, our good friend Mark suggested that I pin on a world map where tiles are sent in from for "It's a String Thing" (IAST).

I immediately loved the idea.  I cherish our community here and the fabulous tiles sent in each week. I delight in the fact that it is truly world wide.  We come from far different worlds and share a common passion for tangling.  How remarkable would it be to see it displayed on a map!

At the time though, many other ideas needed my attention.

As the months passed, I would occasionally search the internet for a map.  Several times I even added one in an online shopping cart, but never followed through with the order.

The idea continued to hover on my 'To Do' list as a few more months passed.  I gave just enough attention to it to keep it from slipping away.  My search for just the right map kept turning up empty and I decided to draw my own.

I bought a black framed cork board - and even that sat in the closet off my studio room for a few more weeks.

Finally, just this week, my schedule cleared enough to put the project into production.

Here is the saga of the creation of the piece.  I hope you enjoy it and who knows, it just may inspire you to make a similar one...

I began by cutting a piece of paper that covered the cork center of the frame - 14" x 20".  With a line art map image from the internet for reference, I penciled the world outline and then traced it over with an 08 Micron.

Next, with an 05 Micron, I added Printemps by Maria Thomas around the shapes.  My daughter Isabella suggested that I use a "wave looking" tangle, and I filled in the remaining areas with large curves of  Sandswirl by Karry Heun.

This is what it looked like at this point~ 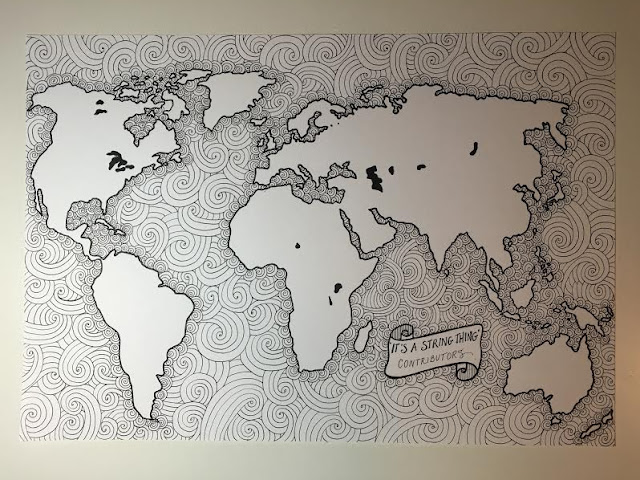 Shading worked wonders for the tangles.  For contrast, here is the map partially shaded: 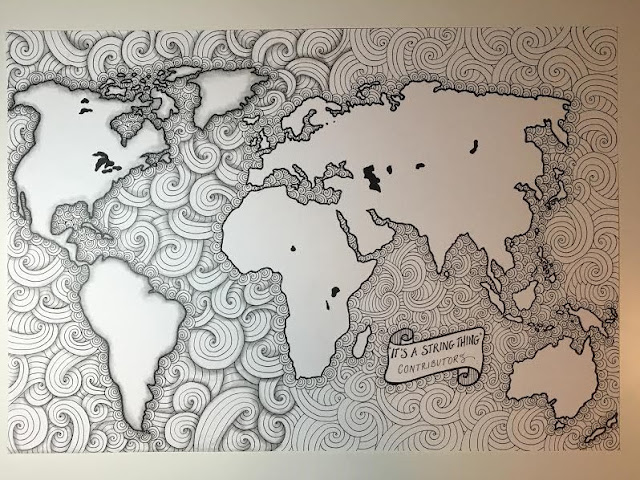 And here it is with the shading finished ~ 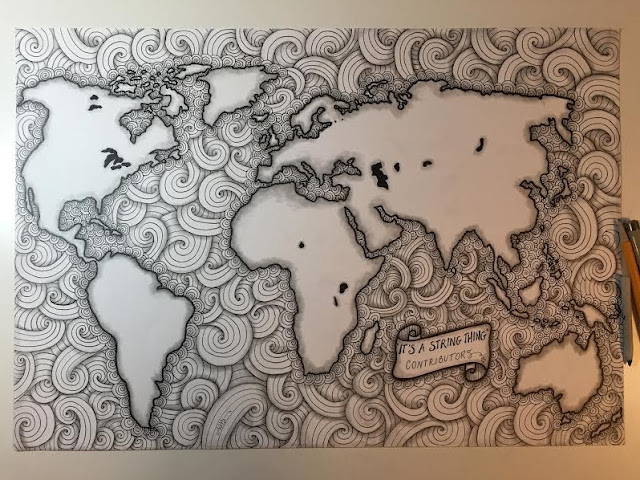 My initial idea was to use little flags on large pins to mark each contributor's name. To date, that number is well over 300 - too many to fit into a small space - so the idea morphed into using the flagged pins to designate the countries of origin.

My husband, Lou, suggested that I have the map scanned and copied in case I wanted to use it for other projects.  I took it to our local Staples and was delighted to pay just under four dollars to have it scanned and a few prints made.  Using one of the copies enabled me to pin the flags and try other little details before deciding what to do with the original.

I used a thin red tape to make the flags.  Using a Sakura Identi-Pen, I wrote each country's name twice, folded the tape over a pin, and then trimmed the end in a 'v' shape. 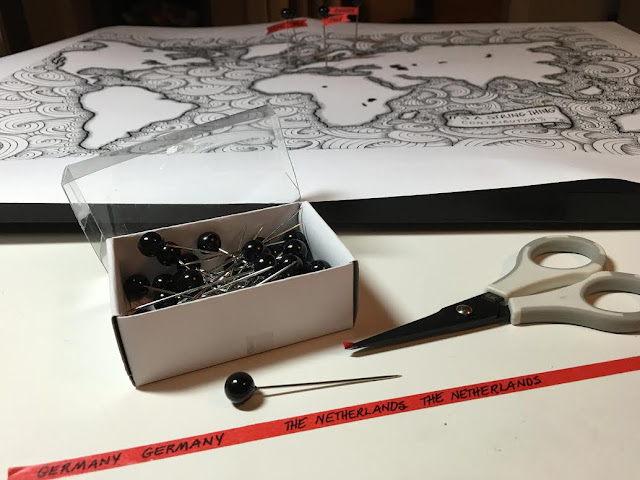 A bit disappointed that the map was too small to personalize the pins, I penned IAST tangler's names in the waves of Sandswirl with an 01 Micron. 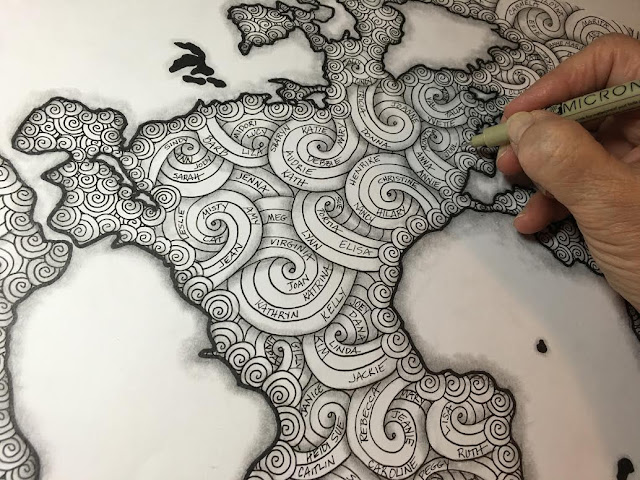 It was coming together nicely ~ 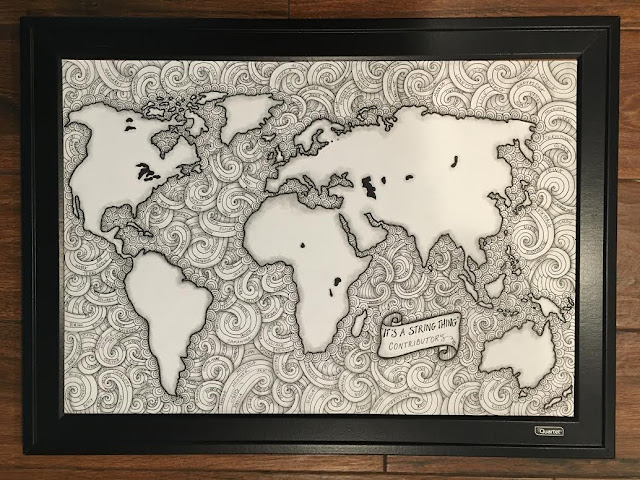 Once the large country pins were set, I added small red tipped pins to designate approximate locations of where tiles were sent from.  In the early years of IAST, I did not always know where the tiles originated, so some contributors' names are included but not their pins. 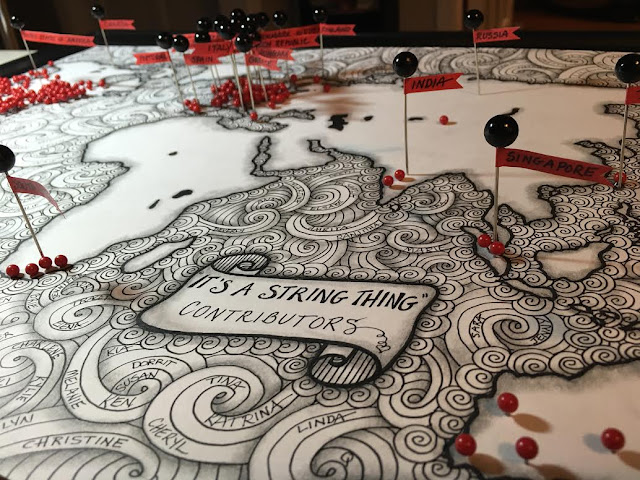 And (ta-da!) here is the final - the ongoing, I should say - project, hanging on my wall ~ 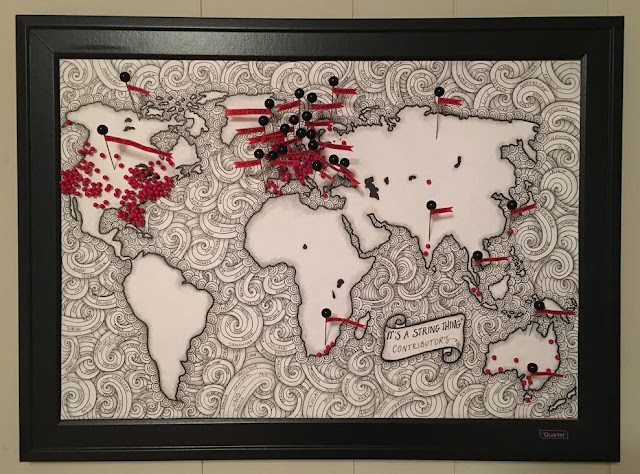 Living art, we could call it, as I will continue to add names and pins as more tanglers join our wonderfully creative community here.

The visual is remarkable because it shows at a glance that five (five!) continents and twenty-six countries are represented, as well as where IAST tanglers are located.

If you have been following along, observing, thinking of sending in a tile - please do!  I'll add you to the tangled map with a very warm welcome.